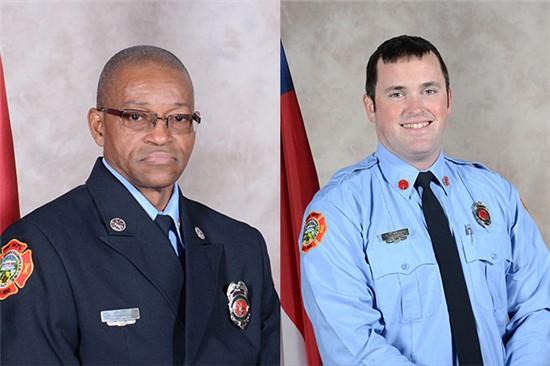 The Hendersonville Fire Department announced the recipients of the 2019 Firefighter and Officer of the Year awards at their Christmas dinner held on December 14, 2019. Both honorees were nominated and selected by their peers. Interim Fire Chief James Miller and Fire Marshal Justin Ward presented the recipients with their awards during the ceremony. Their names will also be added to the Firefighter and Officer of the Year plaques displayed at Fire Station 2.

Engineer Terry Martin was awarded the Firefighter of the Year award. Engineer Martin began serving with the Hendersonville Fire Department in 1985 after holding a position in the City's Public Works Department. He was selected for the award based on his willingness to share knowledge with other members and provide excellent service to citizens. One of Engineer Martin's nomination forms explained a member's sentiment that it was an honor to work with someone who had dedicated so many years to serving the community.

Lieutenant Jared Morgan was honored as this year's Officer of the Year. Lt. Morgan has served the citizens of Hendersonville as a firefighter since 2007. He was selected based on his professionalism and the selfless leadership he shows daily. One of the nomination forms said the following of Lt. Morgan: "He always does his job with a smile and goes out of his way to be kind and courteous to the public. He can turn anyone's bad day into an enjoyable one. The public benefits from his knowledge of the job, knowledge of the community, and dedication to the fire service."