Sometimes referred to as Ad Valorem Tax, property tax is assessed annually against the value of real and personal property, including homes, vehicles, commercial buildings, and vacant land. It is usually expressed in terms of cents per $100 of property value. State law authorizes units of local government (cities, towns and counties) to assess and collect property tax as a source of funding to pay for public services, such as fire and police protection, recreational facilities, and transportation facilities and service.

In accordance with North Carolina law, the City levies property (ad valorem) taxes on July 1, the beginning of the City's fiscal year. These taxes are separate from those levied by Henderson County. The taxes are due on September 1, but interest does not accrue until the following January 5. These taxes are based on assessed values as of January 1. 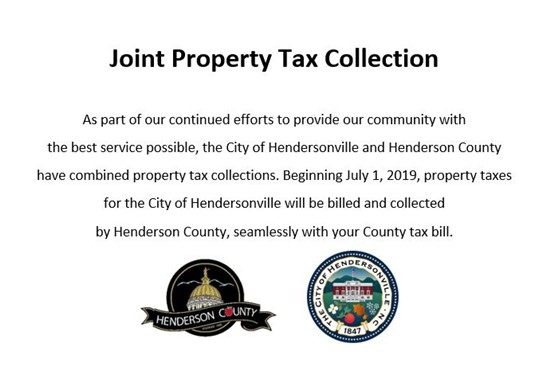 On July 1, 2019, Henderson County began billing and collecting property taxes for the City of Hendersonville. Tax bills currently include both Henderson County taxes and the municipality tax on one combined bill.

Information about The City of Hendersonville Tax Rates

Request for a Statement of Taxes Due (Prior to 2019)

Notice of Delinquent Taxes for Prior Year Taxes

Any questions regarding Property Tax Valuation, reappraisal, and updating tax addresses should be directed to the Henderson County Tax Office.