The City of Hendersonville 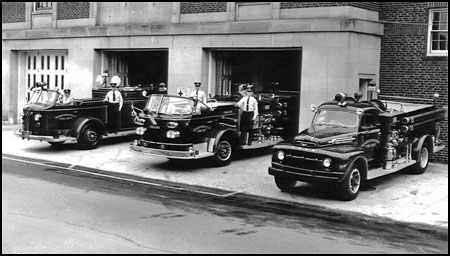 From 1900 to 1945, the Hendersonville Police Chief was also the Fire Chief (as well as the Public Works Director). Clarence Edney was the last Police Chief to serve as Fire Chief. In 1945, his son, Ed E. Edney became the first person to serve exclusively as Fire Chief.

Unfortunately, Hendersonville Fire Department is among those fire departments that have lost a member in the line of duty. On November 26, 1950 at the age of 31, Floyd A. Jackson, Jr. answered his last call at a fire which occurred at 241 North Main Street. The fire was at the business known locally as "Brunswick Lunch." While working at the scene, Floyd fell through the floor which had partially burned through during the fire. After falling through the floor, a pool table also fell through the floor striking Floyd in the neck. Floyd died of his injuries and was laid to rest on December 3, 1950 at Oakdale Cemetery in Hendersonville.

In January, 1977, Forest C. "Bud" Hendrix was appointed Fire Chief, succeeding Ed E. Edney who had been the Fire Chief since 1945. Early in 1985, the Hendersonville Fire Department opened its second fire station. This was the first time that Hendersonville Fire expanded its service level beyond serving the entire city from a single station. The new station was located on Four Seasons Boulevard near Blue Ridge Mall, the city's first covered shopping center. This station was later closed in 1992. In May, 1992, Chief Forest Clarence "Bud" Hendrix retired and was followed by Fire Chief Charlie King who was Fire Chief from 1992-2001. Following Chief King was Beau Lovelace who served as Fire Chief from 2001-2010. After Chief Lovelace retired in 2010, Dorian Flowers was appointed Chief in 2011 and served in that capacity until 2015. Upon his departure Deputy Chief Joseph Vindigni was promoted to Fire Chief from 2016-2019.  Fire Chief D. James Miller served as interim chief from October 2019 - March 2020.  Chief Miller was appointed Fire Chief in March of 2020 to present.

The year 2001 brought what was perhaps the most significant change to the Hendersonville Fire Department up to that time. In August of that year, the HFD moved into a new, purpose-built fire station. For over one hundred years (1893 to 2001), the department's only station shared space with City Hall, in two different locations. In 1928, when the current City Hall was opened, fire apparatus emerged onto King Street, even then a one way street. This created a serious inconvenience and certainly contributed to increased response times to a large portion of the City. The new station included such modern conveniences as an exhaust removal vent system and a library/study room containing books and information on topics such as fire prevention methods and building codes. This library was named in memory of Floyd Jackson, the Hendersonville firefighter killed in the line of duty in 1950. The construction of the new station was widely applauded by all members of the Department, both paid and volunteer and both active and retired, as a major step forward for Hendersonville.

On June 2, 2014 Fire Station 2 opened at 632 Sugarloaf Rd and provided better coverage to the eastern portion of the City. With the addition of the second fire station the department has seen a significant decrease in response times. Station 2 is staffed with three operations personnel as well as the Fire Chief and Deputy Fire Chief and the Life Safety Division.