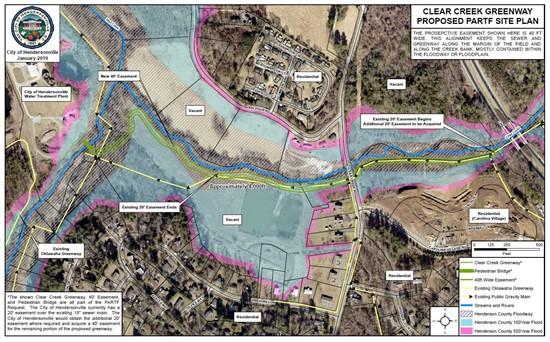 During their meeting on April 4, 2019, the Hendersonville City Council voted to submit a Parks and Recreation Trust Fund (PARTF) Grant for a Clear Creek Greenway extension project. The Clear Creek Greenway would add approximately three-quarters of a mile of additional paved trail and connect the existing City of Hendersonville's Oklawaha Greenway to the Carolina Village community.

The City will be hosting a Clear Creek Greenway public input meeting on Tuesday, April 16, 2019 from 5-6pm in the City of Hendersonville Operations Center located at 305 Williams Street in Hendersonville. The public will have a chance to review the proposed PARTF grant project and provide comments and suggestions.

"This is a wonderful opportunity for the public to learn about the greenway extension project and collaborate with us as we continue to develop this plan," said City Manager John Connet. "We hope any organizations and individuals who support greenway expansions in our area will attend and share their opinions."

The Clear Creek Greenway would consist of a 10' wide paved path that would link to a portion of the northern end of the existing greenway near Berkeley Mills Park. The route would pass over Mud Creek and follow along Clear Creek until connecting with Carolina Village. Features of the greenway extension would include a pedestrian bridge over Mud Creek, benches, emergency blue light stations, additional recreational amenities, and a flashing pedestrian crossing signs and high visibility markings where the greenway crosses Clear Creek Road. The project would extend the greenway network an additional 4,000 feet and provide a connection for future extensions such as a section identified in the City's 2030 Comprehensive Plan that would pass under I-26 to the Highland Square Retail Park where Sam's Club and Walmart are located.

City Engineer Brent Detwiler, who presented the project to City Council, explained that Carolina Village had pledged $250,000 toward the grant project. The preliminary grant application outlined $341,800 being provided by the City to be matched by the PARTF grant. The total project cost was outlined at $933,600, but Detwiler said that the estimate will likely be refined before the application deadline on May 1.

City Council also voted to adopt Henderson County's Greenway Master Plan during the meeting. The Clear Creek Greenway extension appears within the County's master plan and has the potential to serve as a gateway to future destination greenways.