The City of Hendersonville's Multi-area Streambank Restoration Project will restore approximately 13,000 linear feet of streambanks and will protect existing infrastructure while improving stream health and water quality. The project consists of streambank restoration efforts at thirteen sites throughout the City, a stormwater wetland retrofit at Patton Park and other stormwater management components. The project also consists of sanitary sewer replacement and upgrades at three sites including one within Patton Park. 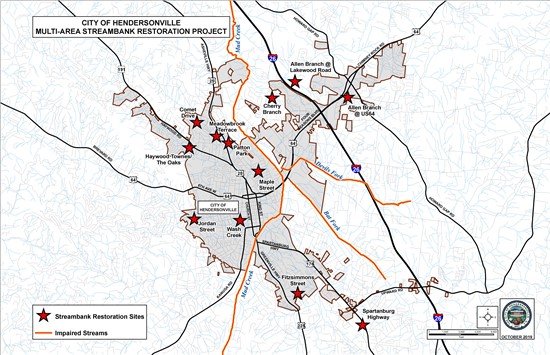 *The Haywood Townes and The Oaks sites are in close proximity and shown as one star on this map due to scale.

The purpose of the project is to restore sections of several urban streams along with their associated vegetative buffers, which will help promote stormwater quality measures and improve the overall quality of Mud Creek - an impaired water. The project will incorporate bioengineering practices using native riparian vegetation. This natural approach restores the ecological and hydrological balance of the stream by utilizing structurally sound, economically feasible and ecologically sustainable methods. Restoration methods will vary by site but will include bank shaping and planting; construction of riffles and pools; installation of rock vanes and vegetation geolifts (eroded streambanks are graded to a stable slope and native vegetation is installed); the reestablishment of riparian buffer; and the use of native vegetation.

Streambank restoration will also serve to protect existing sewer infrastructure. This will decrease the possibility of clean water entering the sanitary sewer system and also reduce the likelihood of a future failure of sewer piping or manholes, which would lead to sewage entering streams. The project is expected to take approximately ten months to construct. The City obtained a North Carolina Department of Environmental Quality zero interest loan to fund the project.

The site with the most visibility and complexity of work is at Patton Park and along Brittain Creek. Phase one of the Patton Park project began mid-October 2019 with sanitary sewer upgrades occurring first. The existing 18" clay sewer line will be replaced with a 24" PVC line. A portion of the walking trail at Patton Park will be inaccessible during construction and signage will be posted to alert park users.

In addition to stream buffer enhancements and invasive species removal, the Patton Park project will also involve the construction of a stormwater wetland.

The existing pond within the park drains an adjacent parking lot but does not provide stormwater treatment in the area. The water is especially turbid, or muddy, and engineering staff have plans to make the area more functional and aesthetically pleasing. Modifications to the pond will convert it into a stormwater wetland accompanied by recreational amenities and educational signage. Later in the project, a bioswale and a section of permeable pavement will be installed in the parking area to better manage stormwater. The City of Hendersonville was awarded a NC-319 Grant from the NC Department of Environmental Quality to help fund a portion of the new stormwater control measures in Patton Park.