It also handles the department time and payroll functions as well as many other operational tasks.

The Support Services Bureau is headed by Captain Tracey Cox.

Captain Cox began his career at the Sheriff's Department, starting in 1985 as a dispatcher, and later as a Shift Supervisor. 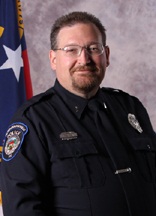 In 1992 he left the Sheriff's Department and served one year as the Communications Director at the Polk County 911 Center, followed by one year as a Computer Specialist for Vision Software in Wilmington, NC.

The Communications Center is manned 24/7. All telephone calls and radio calls are recorded, and logs of all reports, citations, and arrests are maintained here.

The Records Division is responsible for documenting, organizing, filing, scanning and entering into the computer every report submitted by an officer or detective.

These reports cover every aspect of our operation including incident, arrest, and accident reports.

Our records personnel process thousands of documents every year. These reports are later used for investigations and court purposes. Most of the accident reports taken are later copied for the parties involved or for their insurance companies.